Broken Arrow officials are striking while the iron is hot. Representatives from the Broken Arrow Economic Development Corporation (BAEDC) joined City officials Monday, March 29, 2021, at 10 AM in a joint announcement. Officials announced details for a mixed-use development and an agreement for land acquisition for the highly anticipated Innovation District.

BAEDC, under the direction of the Broken Arrow City Council, has been laying the foundation for an employment, housing, and education initiative called the Innovation District shortly after voters approved infrastructure improvements in the 2018 general obligation bond.

“It’s going to be something that will bring, I believe, national and international corporations to Broken Arrow and spur innovation,” said Mayor Craig Thurmond. “It’s one of the biggest things we’ve ever done.”

The campus environment will be in southern Broken Arrow with easy access to the Creek Turnpike. Officials have reached an agreement and are currently finalizing details for land acquisition. In addition to land identification, BAEDC has been working to include education partners, existing industries, and developers.

“We are excited about both announcements and know that they will mutually benefit each other,” said City Manager Michael Spurgeon. “Our City staff has put many man-hours into both projects along with the BAEDC. I believe the collaboration we have on economic development projects in Broken Arrow is unmatched in the state or even the nation.”

“By tying our education and workforce needs to growing companies that will be located in the same campus, the Innovation District will create the environment to develop a cluster of high-tech businesses,” said Jennifer Conway, President & CEO of the BAEDC and Chamber. “With the collaboration between government, the business community, and our education partners at all levels, the workforce pipeline developed will be cutting edge, and will no doubt attract innovative companies with high paying jobs and talent to Broken Arrow.”

Conway went on to explain that more details are forthcoming. “We wanted to share the next vital to step to making the vision of the innovation district a reality. We are very grateful to all our partners and the Broken Arrow voters for making this happen.” 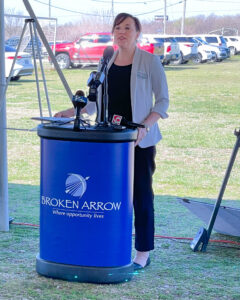 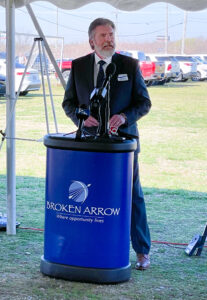 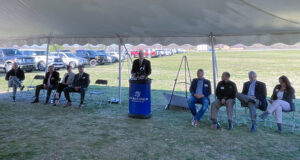