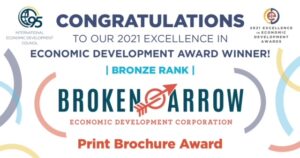 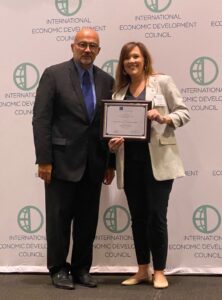 change in urban, suburban, and rural communities. Awards are judged by a diverse panel of economic and community developers, following a nomination process held earlier this year. IEDC received over 500 submissions from 4 countries.

The Grounds for Development brochure is an effective tool for marketing available retail development locations in Broken Arrow. They have seen even service and education-based businesses such as pre-schools find value in the brochure due to its density demographics and traffic counts. It is the one-stop location where businesses can find information on consumer expenditures, spending potential index, and retail leakage when making a case for opening a business in the community. Additionally, the brochure has aided our organization in efforts to build relationships with and provide value to brokers in the community who are looking for ways to connect with businesses.

Grounds for Development is Broken Arrow’s multi-year running retail development publication highlighting prime locations within city limits for retail development. Municipal services in Oklahoma and in Broken Arrow are primarily funded by sales tax collections, it is by far the largest contribution to the general budget fund for the city of Broken Arrow. Increasing awareness and access to opportunities for retail development through marketing efforts helps pave the way for more retail development in city limits which leads to more opportunity for sales tax collections. When our city is fully funded, it has the revenue needed to implement a higher level of municipal services that improve the overall quality of life for our residents while also creating jobs within the retail industry. Traditionally, Grounds for Development is prepared for the ICSC annual conference but was distributed primarily electronically in 2020.

“The winners of IEDC’s Excellence in Economic Development awards represent the best of economic development and exemplify the leadership that our profession strives for every day,” said 2021 IEDC Board Chair and Invest Buffalo Niagara, President, and CEO Tom Kucharski. “We’re honored to recognize the more than 100 communities whose marketing submissions, projects, and partnerships have improved regional quality of life.”

We’re incredibly honored to recognize the outstanding organizations that received this year’s Excellence Awards. This year, more than ever, has presented opportunities to innovate, impact, and progress the cities, neighborhoods, and communities around us. Each of this year’s recipients represents the best of the economic development profession and exemplifies the ingenuity for fellow economic developers to aspire to in the years to come.

About the International Economic Development Council: The International Economic Development Council (IEDC) is a non-profit, non-partisan membership organization serving economic developers. With more than 5,000 members, IEDC is the largest organization of its kind. Economic developers promote economic well-being and quality of life for their communities by creating, retaining, and expanding jobs that facilitate growth, enhance wealth and provide a stable tax base. From public to private, rural to urban, and local to international, IEDC’s members engage in the full range of economic development experiences. Given the breadth of economic development work, our members are employed in various settings, including local, state, provincial, and federal governments, public-private partnerships, chambers of commerce, universities, and a variety of other institutions. When we succeed, our members create high-quality jobs, develop vibrant communities, and improve the quality of life in their regions. Learn more at iedconline.org.