Norman Stephens has served Broken Arrow for over 3 decades 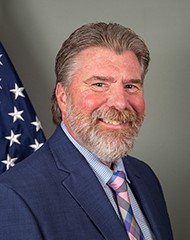 Norman Stephens, the City’s current economic development manager and retired deputy chief of police, has been promoted by City Manager Michael Spurgeon to the position of assistant city manager of administration. In his new role, Stephens will oversee the administrative division of the organization, which includes the Finance, Maintenance Services, Human Resources, City Clerk, Information Technology and Economic Development departments.

“I look forward to this wonderful opportunity” Stephens said. “Serving the citizens of Broken Arrow has been my passion for the last 37 years.”

Stephens’ career with the City began in 1984, working in the Police Department. After 27 years with the agency, Stephens retired as deputy chief of police and began working as economic development manager for the City in 2011.

Stephens holds Bachelor’s and Master’s degrees from Northeastern State University. He also is a graduate of the 171st Class of the FBI National Academy in Quantico, Va.

As economic development manager, Stephens is responsible for numerous projects that have brought millions of dollars to Broken Arrow. This includes planning and implementation of the award-winning Rose District, bringing the Warren Theater to the Shoppes at Aspen Creek and continued involvement in the redevelopment effort of New Orleans Square. Stephens has recruited and negotiated economic development agreements for retail, restaurants, and multifamily housing that increased growth in the Rose District by $40 million.

“Norm is an experienced servant-leader with extremely valuable organizational knowledge and someone who is well respected within the community,” said City Manager Michael Spurgeon. “The relationships and respect he has built over his career will serve our citizens, businesses, and the administration division of the organization very well.”

“Norm is a terrific public servant and will continue to be highly-regarded within Broken Arrow in this new position,” said Mayor Craig Thurmond. “I’ve never had anything but the highest respect for Norm, from his time with the Police Department and his role in economic development. On behalf of the City Council, we look forward to working with him in a new capacity.”

“Filling the shoes of someone like Russell Gale is a tremendous task,” Spurgeon said. “Russell has been with the organization for over 40 years and is well-respected within the community and will surely be missed. However, I have no doubt that Norm is ready to go and will do an outstanding job in his new role.”

The City will begin recruiting for an economic development manager immediately.